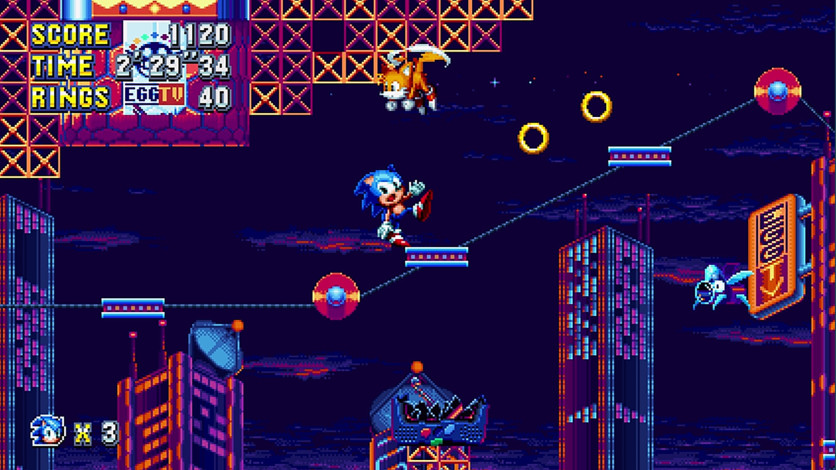 After recently diving through Sonic 3 and Knuckles again, and once again seeing the classic Sonic formula in action, I had a pretty decent idea of what it was going to take for Sonic Mania to be a breakout hit. Judging by the reviews, I think it pretty much nailed it.

So far, Sonic Mania has gotten the kinds of reviews Sonic Team had been striving for and falling far from for over a decade. Outside of say, Sonic Generations, recent Sonic the Hedgehog games have been a bizarre mishmash of uninspired level design, awkward gameplay, outrageous character models, and overall lackluster presentation. Sonic Mania turns this all on its head, however.

I’ve already played a substantial amount of the game and can say that the most simple answer for its success lies in the formula of the original Sonic Trilogy. In no particular order, these would be:


There are other factors that are less important, such as the nostalgia aspect of things, but what it comes down to is the gameplay, the level design, and the atmosphere the game creates. The original Sonic games were masters of this, and Sonic Mania brings it all back, including the little things, such as the ways the levels lead into each other and the awesome ways you can interact with the environment, especially in the brand new zones like Studiopolis.

Sometimes, a game formula just works. Sega and Sonic Team seemed convinced that with the advent of 3D, they had to completely overhaul Sonic and toss out everything that made it a great platformer. Mind you, many other franchises did the exact same thing and garnered success, but many of them did it with much more attention to detail. The original Sonic games had a feel to them, it was a total package deal. Now with Sonic Mania, you have a team of guys working on it that are fans, who have known this for years, and damn did they deliver.

It’s funny in a way, that many of the changes I talk about in my Sonic 3 and Knuckles Hype run actually came to pass in Sonic Mania, without actually knowing much about the game (I limited myself spoiler-wise to only a couple trailers and official teasers). This is because I know what makes a good Sonic game: I’ve been a fan of the originals since I was a little kid in the 90s. And it’s not rocket science either. Sonic 3 and Knuckles, for instance, is just about a perfect platformer. Replicate that game, add in new twists, great music, and longer, more complex levels, and you’ve got yourself a beast of a game. Sonic Mania lived up to the hype: indeed, I think in many people’s minds it surpassed it. You can tell, because as hardcore as some fans’ expectations for this thing was, it surpassed them in many respects. I even have to admit that my expectations for this game were pretty high, just because I wanted it to be a “classic” Sonic game so much, but as high as the bar was in my mind, it knocked my expectations out of the park (and I’m not even finished my first run of it yet!)

In my two-part pre-view of Sonic Mania, I delve into all of these topics and more. Sonic Mania hype is in full swing, and I will be getting a full scale review out for you guys soon on the channel, as well as walkthroughs and possibly some live streams. It seems the answer to Sega and Sonic Team’s prayers was hiring people that actually care about the franchise and aren’t just trying to do new stuff for the sake of doing it. I can’t say enough, without spoiling anything, how solid Sonic Mania is. Until I tackle the final levels and play around with it some more, I’ll withhold giving it a numeric review score, but it’s easily comparable to any 16-bit platforming classic, and may very well be a better game even than Sonic 3 and Knuckles. We’ll have to see how it holds up in the end game and what it’s replay value is like.