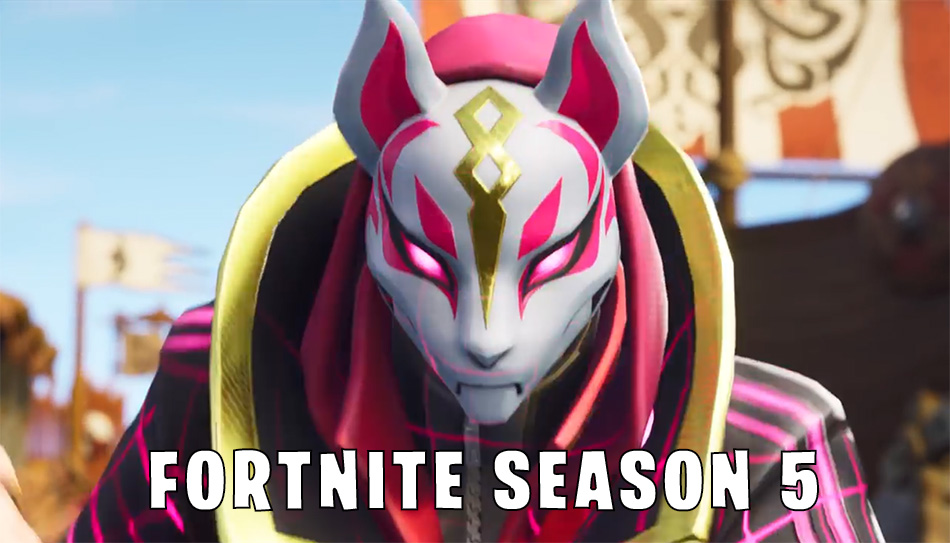 The build-up to Season 5 was incredibly intense. With the launch of the rocket and the giant dimensional rift that opened in the sky, Fortnite fans were left wondering: what exactly does Epic Games have up their sleeve?


In the last couple weeks we’ve had to patiently wait as the rift grew wider and various well-known POIs around the map changed, including the disappearance of the Durr Burger. The burger, by the way, landed in the middle of a California desert in the real world, like the literal Real World.

This morning Season 5 finally released, and with it a host of new changes to the Fortnite map, some insight as to what the rifts were all about, and the brand-new Battlepass.

From the looks of updated map, rifts joined the Fortnite world and the Real World. Now a massive hunk of California Desert is where the swamp biome used to be. Where Moisty Mire once stood, we now have Paradise Palms, a Route 66-esque desert truck stop kind of town. There are numerous other new smaller points of inertest scattered throughout the desert, most notable is the updated racetrack, which is fully functional and is meant to be used in tandem with the new Golf Carts, which is another story.

It also seems like time, not just dimension, has played a factor in Season 5. The large mountain in the southwest part of the map that was once home to a lone house on top of a hill has been completely transformed. There is now in its place a waterfall and Middle Ages Viking style hut village, replete with a ship. It is also snowing in this new mini-biome, which only adds to the atmosphere. Since there is a Viking themed skin in the Battlepass, it is safe to assume that this is going to be an ongoing motif this season: modern day Western Americana / Racing fused with Nordic tropes.

Another awesome new POI has completely replaced Anarchy Acres in the north. We now have Lazy Links, which is crazily enough, a country club. It looks like the farmers were getting bored! This is actually not a random change, as it plays into the battlepass: you can now literally golf in Fortnite using the unlockable “toys” function. There are tees in the game and everything.

This is also one of the premiere locations to fetch yourself a golf cart, the new vehicle that has been added with the patch. Faster and more durable than shopping carts, they also provide room enough for 4 players to ride at once. Months ago it seemed like Epic didn’t have much intention to add a vehicle mechanic to the game like other Battle Royales have, but after experimenting with the shopping carts and other forms of increased mobility (like the jetpack and hoprocks) it’s clear that they thought more mobility makes the gameplay more healthy.

So now we can ride around to our heart’s content! 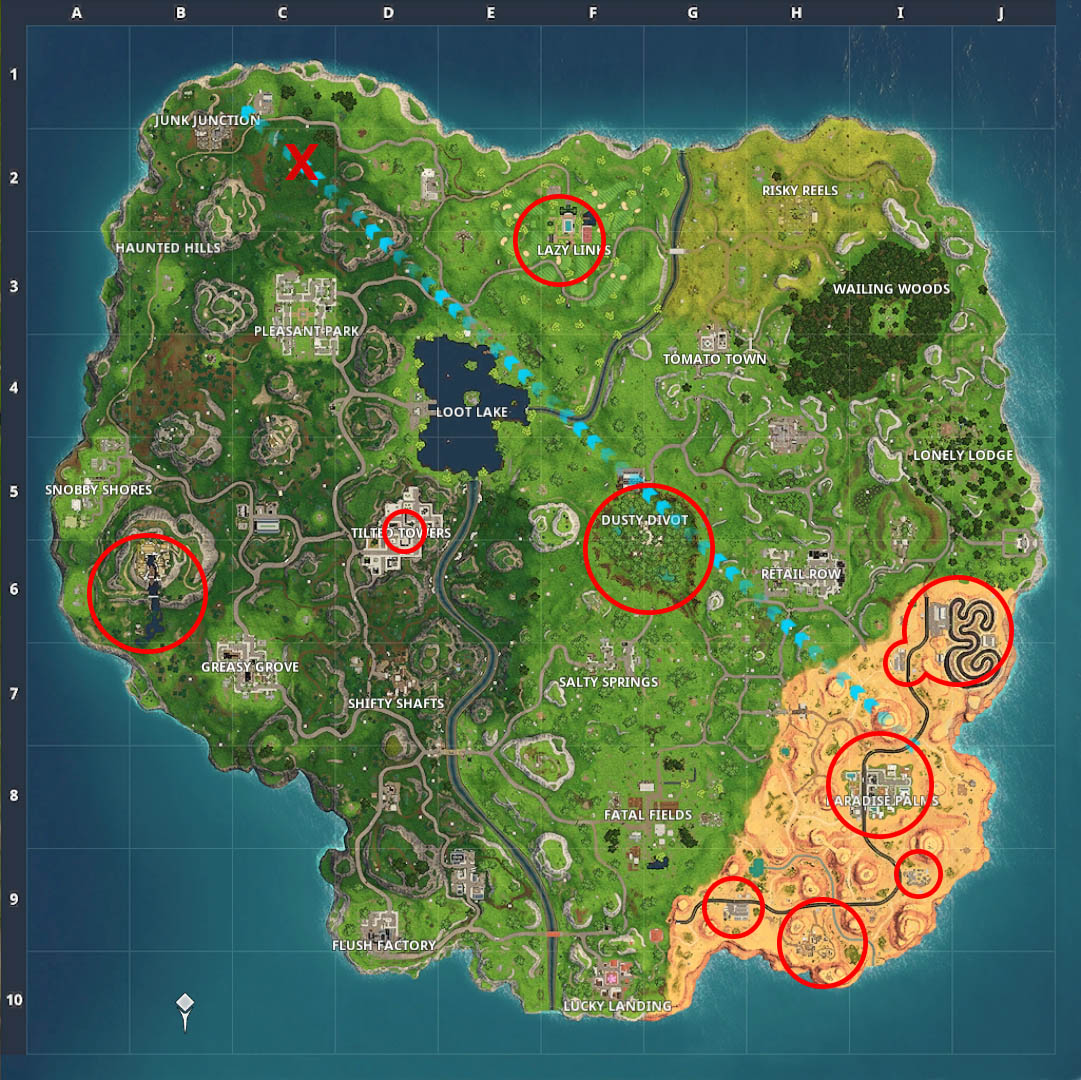 Dusty Divot has also received another makeover, with more trees than ever and even some pools of water. It’s looking like Dusty has become a sort of “wildization” area where nature has taken over modern tech. It also supplies us with another forest / swamp kind of area in the wake of Moisty vanishing.

There are other changes to the map such as the disappearance of the Soccer Pitch in the northwest and new construction at Tilted Towers. We also know that the map will likely be undergoing more changes as Lonely Lodge, Greasy, and other places affected by the dimensional rifts sort themselves out. Plus, we know Risky Reels will be getting an upgrade in order to screen a certain winner’s video in the not too distant future.

Altogether it’s looking like this is one of the biggest changes to the Fortnite map to date, and as many were clamoring for a change, this is certainly a breath of fresh air. The desert and “snow” biome also add a bit of Realm Royale feels into the mix, which isn’t a bad thing.

One notable change that is included with this patch is a complete overhaul to how shotguns work, to keep them in line with all of the new weapon mechanics and game balancing we’ve seen over the last few months.

Up until now, all of the shotguns in the game have relied on a random spread within the reticle, which means that precise shots (especially while moving in the middle of a build battle) were notoriously hard to hit. Many on Twitter, Facebook, and Reddit thought shotguns were broken or glitched, and “9 damage” is one of the biggest running memes in Fortnite. However, the so-called inconsistent damage has always been due to the random spread of shotgun pellets.

This is no longer an issue, as now shotguns have a set spray pattern, as well as new hit indicators to tell you exactly where your pellets land. This means that players that are able to consistently hit their shots will be rewarded with higher damage output. However, this also means that players that weren’t hitting their shots and were blaming glitches are going to be in for a rude awakening. No more lucky spread headshots: you either hit or you miss. Ultimately this is very healthy for the game, but it remains to be seen how it will affect the current meta. With the rise of effectiveness in SMGs, the addition of the Drum Gun, and increased amount of other viable battle options (stink grenades, buffed Minigun, LMG, C4, etc.), we don’t know yet if shotguns will have a strong niche.

In all likelihood, the reliability of being able to hit shots, especially up close, is going to mean shotguns will remain a relevant part of the Fortnite arsenal, at least for the time being.

Rifts and Other New Mechanics

Last season we had hoprocks, now we have rifts. These small portals have opened up all over the map, and are basically a one-time-use instant launchpad: they send you falling from the sky at the point of the rift, and allow you to immediately take high ground, get to a new area, beat out the storm, or reposition yourself. Awesome new addition, although be wary of using them while in a Golf Cart, your gliders do not open, and you just fall out of the sky. There are varying clips of people landing perfectly safe, as well as crashing to their deaths on impact and falling off the side of the map after tumbling down trees and cliffs. Use them at your own risk!

Apparently with the new unlockable toys from the Battlepass, you can now play golf, basketball, and beach ball by using the corresponding emotes. Your goals will even show up in the kill feed, which is actually rather amusing. They are creating entire mini-games in the middle of a Battle Royale. Before long it’s going to get even more complex – it’s looking like Epic has a lot more planned for Fortnite than just being a basic BR. From January on it seems like at least a quarter of everything they add to the game is to flesh it out on a grander scale, making it more like an all-inclusive gaming experience rather than just “PUBG with building.”

Anyone who has played Fortnite for more than ten minutes over the last few months has to admit that there’s just something about the game. It’s certainly a lot more than a survival shooter at this point.

Another addition to the game, as previously mentioned, is the functional Racetrack where the old GUS racetrack used to be. It comes equipped with a lap system that even records your time around the track. You can quite literally race your friends – but be sure to master the drifting mechanics first.

As if Carbide and Omega from Season 4 weren’t cool enough, it looks like this Season’s signature skins have far cooler unlockable styles. Drift goes from a California graffiti artist to what looks like a Kitsune Samurai straight out of some kind of Anime, and Ragnarok, already cool in his own right, goes from typical warlord Medieval villain to a straight up shaman deity of some kind.  Epic has once again outdone itself.

The Battlepass also has other great unlockable skins, including golf related ones, and a Nordic warrior woman.

There aren’t as many dances this time around, because room was made for all the basketballs, golf balls, and beach ball emotes. There’s still plenty of other goodies, including more banners, loading screens, contrails, and more. It’s a no-brainer steal at 950 V-bucks.

Something to note about this season’s Battlepass: it seems they have implemented a set amount of experience necessary to unlock the styles for the signature skins, which means that you can unlock them even after the Battlepass period is over. No more “level 80” death grind at the end of the season. People with actual lives, rejoice!

Besides all of the fun and downright hilarious mechanics they added to the game with this patch, it’s also looking like the combat is in its most balanced state yet, in anticipation of the summer tournaments. This needed to happen for the longevity of the game, but it’s just nice to know that the iron-clad setup of double-shotguns and AR is finally over. There are so many combat options now that pigeon-holing yourself to just one go-to setup is actually detrimental anyway.

There are niche weapons like the LMG and silenced pistol, SMGs are actually relevant and not just useless filler guns, silenced SMGs compete healthily with ARs and Drum Guns, stink bombs and C4 are excellent anti-camper weapons and can also be used to flush out opponents in order to get pop shots off on them in the middle of a build battle, and snipers are stronger than ever because of the nerf to double-shotguns.

It’s hard to predict how Season 5 will play out story-wise, but it’s safe to assume the game itself isn’t going anywhere any time soon. The core gameplay is better than ever, even nabbing a Victory Royale feels more satisfying than ever with updated graphics and awesome “slow-mo” effects that occur when you down the final opponent. These kinds of polishes just add to the game’s overall lifespan.

It’s also important to note that this is the last season before Fortnite’s 1 year anniversary, so as big of an event as today was, it’s likely only a taste of what we can expect in September.

Fortnite Ultimate Weapons Guide (With more updates on the way!)