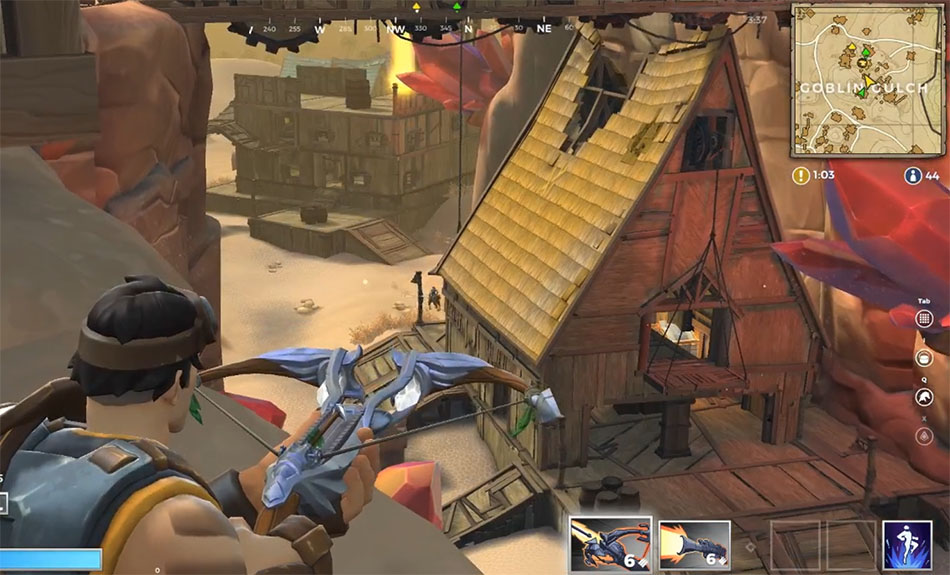 Battle Royale like you’ve never seen it before: mystical setting, classes, weapon crafting and more. Realm Royale is only in Alpha, but it’s already looking quite promising. Can it do what Radical Heights failed to do, and push its way into the conversation between PUBG and Fortnite?

What started as merely an offshoot Battle Royale mode of Paladins, has blossomed into an early alpha-state gem of the BR world. Cartoony and charming like Fortnite, but with somewhat more refined gun mechanics and a MOBA-esque class / hero system, and you have the simple recipe for an addictive game that is attracting a lot of attention. Big streamers like Summit1G, Ninja, and Shroud have already dived into it and openly admit how fun it is.

Realm Royale has just been a blast, hopefully it sticks around. Assassin for life(F warriors).

It’s still early, and many kinks are being worked out, but it’s safe to assume that Realm has the right sauce to stay relevant.

The big three mechanics that people love about the game also give it its unique feel and identity.

When you add solid graphics, music, and gunplay into the mix, you have a satisfying piece of work that is already biting into some of PUBG’s and Fortnite’s playerbase. It’s somewhat rough around the edges, the servers need work, there are a few glaring glitches, and the devs have put out a few tweaks that the community hasn’t exactly agreed with, but for the most part, Realm is doing what Radical Heights failed to do: create hype and show some staying power.

Don’t let the cartoon graphics or silly chickens running around fool you. This game is downright tough. Super low “time to kill” (TTK) coupled with fast gameplay and mostly projectile weapons, means that players with good aim can literally eliminate you in 3 to 5 seconds even if you are decked out in full Legendary Armor. Early game can be even more ridiculous, as unlike PUBG and Fortnite, there really aren’t any “outskirts” you can land at in this game, and to survive, you really have to land in a POI and get kills. That’s the only way to get a good amount of shards and chicken trophies.

So if you want to get better, you have to mix it up and be prepared for some rage-inducing moments. After all, it’s BR. Follow these tips to improve your game a bit:

Initial Verdict on Realm Royale: Does it Live up to The Hype?

So far it’s looking like Hi-Rez studios has crafted a gem. Whether or not it stands the test of time is the real question. It has a solid formula, but shaky patches this past week have some players on the fence. A recent patch actually did away with the forging of Legendary Weapons, which had the community raging. Thankfully, this was reverted and now the mid-game is healthier than ever, since it takes more shards and chicken trophies to craft these powerful weapons.

With Fortnite’s Season 5 only a couple weeks away, and PUBG’s recent release of the Sanhok map, as well as all of the new BR’s slated for release this fall, Realm Royale has extremely stiff competition. It fills a niche, granted, but that might not be enough.

Right now, there are definitely aspects of the game that need work, but it is undeniably fun and rather polished for an alpha. A battlepass with mount skins and chicken skins was announced and will be coming soon. We’ll have a great judge of how healthy the game is by how popular the battlepass is.

Realm Royale is currently living up to the hype, but we’ll see how it fares once Fortnite’ Season 5 drops, which is almost certainly going to be a massive success and the next era for what is already a cultural phenomenon. Many proponents of Realm Royale are players who don’t mind Fortnite but simply don’t enjoy the building mechanics, so it’s hard to say just how much Fortnite’s popularity will affect Realm. As of right now though, I definitely recommend giving it a shot if you haven’t tried it. Where else you can cluck around as a chicken and ride a horse through a desert in a BR?