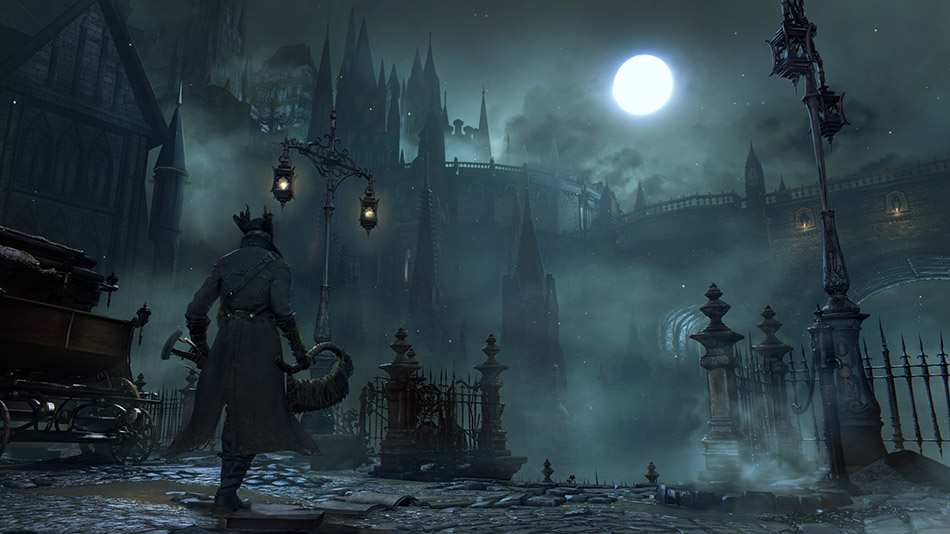 We’re a few years out from the release of Bloodborne, yet the game continues to impress. With its character build varieties, randomized bonus dungeons, and fun PvP, it’s no wonder it still boasts a vibrant community and strong player base. Fans of Bloodborne and its sister game series Dark Souls know why they keep coming back: they’re simply fun, challenging, well-designed games.

I’ve only just begun diving into Bloodborne and discovering everything it has to offer, but as a longtime video game fan it hasn’t taken me long to realize how much Bloodborne turns conventional RPG norms on their head. The sheer difficulty alone is a breath of fresh air, as most RPGs (especially these days) treat you with kid gloves and save any real difficulty for the last reaches of the game, and even that is sometimes a generous assessment.

Where Bloodborne’s difficulty really shines is in its boss fights. Towering behemoths with wide move-pools and enough tricks up their sleeve to keep even veteran players on their toes. There aren’t too many “gimme” boss fights in Bloodborne the first time through, as new players must learn patterns, adapt, poke and prod for weaknesses, and sharpen their reflexes in order to progress. Preferring slower paced games, I found the initial stages of the game to be almost insurmountable. However, the game is fair, and if you pay attention and quicken your reaction time, you will be surprised what you can pull off. I couldn’t even believe myself when I first defeated Father Gascoign and received that delicious “Prey Slaughtered” notification, as in my head the previous day I thought I would “never” beat him. This is good game design at its finest: be difficult enough to push players almost to the brink of frustration, but fair enough to give them space to learn and get better.

So that’s where Rom, the Vacuous Spider comes in. You first encounter this thing about three-fourths of your way through the main plot of the game, when by that time, you feel like a seasoned vet who has gone through hell and back, only to come out on top. This big fat spider thing is waiting in the wings to crush your dreams.

If you look at all the variations of traditional RPG bosses, you come out with a few standard templates. Rom doesn’t really fit in any of them. The first thing you have to deal with is the fact that it drops about a dozen little spiders on the field to act as guardians, and unlike typical RPG fodder mobs, they hit like trucks and have insanely high frontward defense. In fact, if your vitality isn’t high enough at this point, they can easily one-shot you with their plunging attack, which is also difficult to see coming before you adjust to their speed. They also have an array of other physical attacks that hurt pretty bad, including a long combo. Did I mention there’s a ton of them?

So immediately the player is put into a position relatively rare in the video game world: I have to kill a bunch of enemies surrounding the boss if I have any chance to fight it fairly. But we’re not talking the usual two mobs, or even three or four, as sometimes may be the case. We’ve got about a dozen spiders ready to leap on you at a moment’s notice, all of which need to be hit from behind to be reliably dispatched, and which can basically kill you outright if hit by their main attack. This puts the player in a distinct “we’re not in Kansas anymore” mode, which is unnerving enough.

But we haven’t even gotten to the juicy stuff yet.

Once you are able to progress past the first wave of minions and are able to land some hits on the defenseless Rom herself, she will teleport away, reappear at a distance, drop another entire group of spider underlings, and now begin attacking you with powerful magic spells. In lesser games this would easily qualify as “final boss” material, but in Bloodborne it’s just another Tuesday.

What makes the mechanics of the fight particularly ingenious, is that Rom will execute a meteor-like attack that gobsmacks you if you are standing still, resulting in almost guaranteed death if multiple parts of the spell hit you. You must be running or dodging in one distinct direction in order to survive it. And Rom will continue to cast this spell repeatedly if you are at a distance. So instead of methodically trying to attack the underling spiders at a distance, you are forced to jump into the mix, which results in absolute chaos. Spiders flinging themselves at you left and right, Rom rolling around and casting its other spell, an AOE attack that the player must dodge by distancing themselves temporarily from the center of the battle.

The natural inclination of a gamer is to lock on to their target and keep it in focus, but this fight forces the player to cover several bases: Rom has “tells” that choreograph whether or not the meteors are coming, or the AOE, the little spiders will hesitate for a moment before leaping, and will also swipe at you, and lastly, your stamina bar is of utmost importance in this fight. It must be kept in the corner of the player’s eye at all times. Needless to say, this battle gave me fits when I first encountered it, because I was so used to keeping my eyes on one or two things at most in boss battles. Conventional wisdom says target-lock the enemy in front of you, attack it, dodge what’s in front of you, repeat. Not so much with this fight, where the target-lock function is actually a detriment. Lock on to any one thing and soon you’ll find yourself scrambling in a mass of spider legs and meteors.

Why is this significant? Well, the video game industry needs innovation. More “ah ha” moments. Making something egregiously difficult by inflating its HP or by giving it a super powerful attack is not what players are looking for. Bloodborne handles difficulty with such tact that you rarely ever question it, even if it is something imbued into the game from the very start. The Rom battle is case in point: there are myriad ways of defeating the boss, but few of these ways are conventional. The most important part of the fight is that you really have to go against your instincts and ignore the vast bulk of the spiders. In a game where a pack of three dogs can maul you to bits in seconds, you have to throw caution to the wind and simply dive into an armada of spiders and head straight for their leader. When you do break through the horde, you are forced to either hit and run or go all in with bolt paper or some other heavy hitting technique, and hope in the process you can dodge random spiders as well as bail if Rom decides it’s time for an AOE. Bottom line, it transforms the tense-but-calculated formula of most boss fights into a heart-pumping scramble that actually requires lightning fast reflexes, quick decision making, and an awareness of multiple things at once.

As a longtime gamer, these are the kinds of trends I like to see. Despite not being even remotely close to what I would call a “great” gamer, I do appreciate a challenge. Not the “this game was designed to steal quarters from kids at the arcade” kind of challenge that plagued so many video games of the 90s, but an actual well-rounded, thought out task that needs more than button mashing or grinding to beat. As I’ve mentioned before, small but interesting video game quirks are to me a sign that we are entering a kind of gaming Renaissance. Not all titles follow this formula of innovation, and to be sure there is still plenty of over-polished hackneyed garbage floating around out there, but the kinds of mechanics present in Bloodborne actually show that not all devs are devoid of creativity. The goal isn’t trying to force and image or cash in on a trend, but to deliver a fun and rewarding gaming experience, and I think that’s something all gamers want, regardless of skill level.